I am still working on several posts – but in the meantime, I wanted to post some photos from my visit to the operating room with Dr. Wilfredy Castaño Ruiz, one of the thoracic surgeons at Hospital General de Medellin.

Readers may notice that some of the content of my observations of the operating room have changed.. In reality, the reports haven’t changed – I have just chosen to share more of the information that I usually reserve for the books since I probably won’t get time for a “Medellin book”.  So, if you are squeamish, or if you don’t want to know – quit reading right about now…

It was a surprise to meet Dr. Wilfredy Castaño Ruiz because it turns out we’ve already met.  He was one of the fellows I encountered during one of my early interviews in Bogota, with Dr. Juan Carlos Garzon Ramirez at Fundacion Cardioinfantil.

Since then (which was actually back in the early spring of 2011), Dr. Castaño has completed his fellowship and come to Medellin. 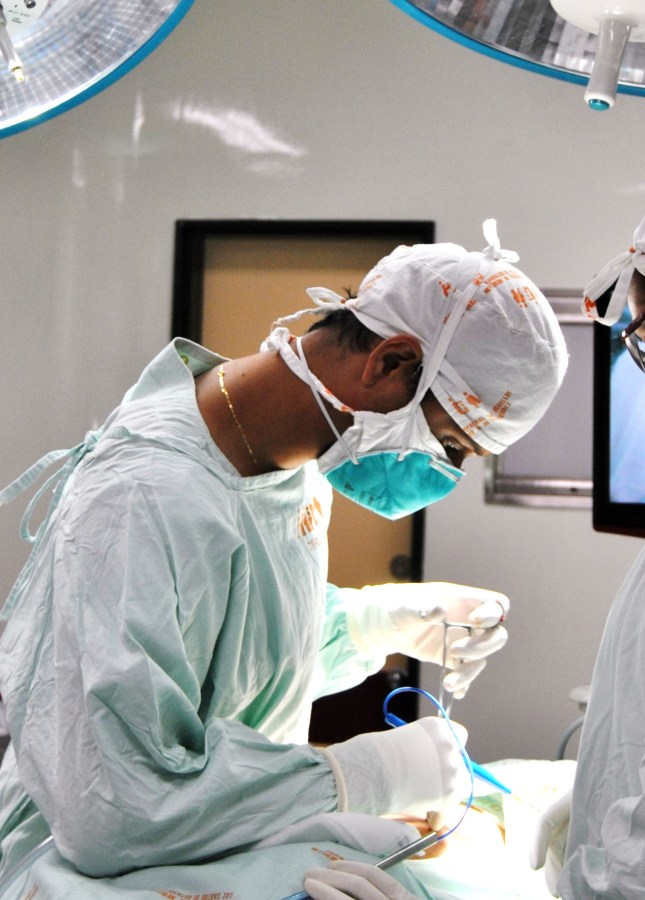 Yesterday, I joined him in the operating room to observe a VATS decortication.  The case went beautifully.

Dra. Elaine Suarez Gomez, an anesthesiologist who specializes in cardiothoracic anesthesia managed the patient’s anesthesia during the case.  (This is important because anesthesia is more complicated in thoracic surgery because of such factors as double lumen intubation and selective uni-lung ventilation during surgery).

Anesthesia was well-managed during the case, with continuous hemodynamic monitoring.  There was no hypotension (low blood pressure) during the case, or hemodynamic instability.  Pulse oxymetry was maintained at 98% or above for the entire case.   Surgical Apgar: 8 (due to blood loss**) 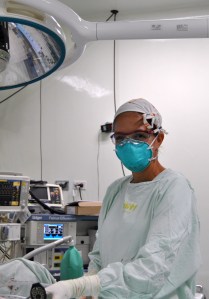 *”Registered nurse” is not terminology common to Colombia, but this is the equivalent position in Colombia, which requires about six years of training.)

** In this particular case, the surgical apgar of 8 is misleading.  The anesthesia was excellent, and the surgery proceeded very well.  However, due to the nature of surgical decortication (for a loculated pleural effusion/ empyema) there is always some bleeding as the thick, infected material is pulled from the lung’s surface.  This bleeding was not excessive for this type of surgery, nor was it life-threatening in nature.

I spent the day yesterday at Hospital General de Medellin, and I am going back today for another visit.  I’ll be revising and updating this post as I go along.  I spend most of the day with Dr. Luis Fernando Meza Valencia and Dra. Elaine Suarez Gomez, but we will talk more about these two doctors in another post.

Quite frankly, it is the nicest public facility I have ever been in, anywhere.  The entire facility (and I was peeking in corners and closets) was spotless – and that included the operating rooms.

It’s the main trauma center for Medellin, and the largest public facility with a large well-coordinated ER.  (The ER was quiet and orderly during my visit – despite being about half-full.

The hospital is well-equipped with 3 mixed ICUs, a step-down unit, a  large neonatal ward and NICU, pediatric ICU along with multiple wards for medical patients. There are nine operating rooms, including a dedicated cardiac operating room (quirofano #1), and a separate cath lab with OR capabilities (for endovascular and hybrid procedures.)

Attached to the hospital is the ‘Consulta Externa’ where the doctors see their patients, along with a non-invasive cardiology clinic (echocardiograms, stress tests and the like, and laboratory.  I have certainly missed several departments – as I passed auditoriums and several other departments during my visit, but all of the major elements are included above.

They do not have a PET scanner at Hospital General de Medellin (but given the expense of this machinery, there are only a few PET scanners in Colombia.  There are only  two in Bogotá – one at the Fundacion Santa Fe de Bogotá, and one at the National Cancer Institute.)

The hospital, while busy was not as hectic or crowded as some of the other facilities I have seen in the past.  I’ll be at Hospital General for multiple visits, so I will have plenty of opportunities to see if that changes.

During my visit – Dr. Carlos Garcia, the Chief of Surgery was talking about  the new obstetrics outpatient monitoring program along with several other services that are fairly uncommon for publicly funded hospital facilities.

I only received the basics of the OB program (because OB is not really my area of expertise) but as Dr. Garcia explained – it’s an out-patient monitoring program for high-risk obstetrics patients.  Patients are equipped with fetal monitors so that they can be in their own homes during much of their gestational period, instead of confined to the hospital.  The monitors are reviewed continuously by the staff at Hospital General – and if there are any serious abnormalities or evidence of fetal distress, not only is the patient contacted – but an ambulance is automatically sent to bring in the patient for urgent/ emergent evaluation and treatment.