Been a busy week  – (Yea!) but now that it is the weekend, I have a chance to post some more pictures and talk about my day in the operating room with Dr. Gabriel Omar Ramos Orozco.

Despite living in a neighboring apartment, interviewing Dr. Ramos proved to be more difficult than anticipated.  But after several weeks, I was able to catch up with the busy surgeon.

It’s different for me, as the interviewer to have this perspective.  As much as I enjoy him as a friendly neighbor – it’s the serious surgeon that I prefer.  It’s a side of him that is unexpected, and what finally wins me over.

Originally from San Luis Rio Colorado in the neighboring state of Sonora, Dr. Ramos now calls Mexicali home.  Like most surgeons here, he has a staff position at a public hospital separate from his private practice.  It is here at IMSS (Instituto Mexicano del Seguro Social) where Dr. Ramos operates on several patients during part of the extended interview.

Dr. Ramos reviewed patient films and medical charts prior to the procedures.  Patients were prepped, positioned and draped appropriately.  Surgical sterility was maintained during the cases.  The first case is a fairly straight forward laparoscopic case – and everything proceeds rapidly, in an uncomplicated fashion.  45 minutes later, and the procedure is over – and Dr. Ramos is typing his operative note.

But the second case is not – and Dr. Ramos knows it going in..

The case is an extensive tumor resection, where Dr. Ramos painstakingly removes several areas of implants (or tumor tissue that has spread throughout the abdomen, separate from the original tumor).

The difference between being able to surgical remove all of the sites and being unable to remove all of the gross disease is the difference between a possible surgical ‘cure’ and a ‘de-bulking’ procedure, Dr. Ramos explains.  As always, when entering these surgeries, Dr. Ramos and his team do everything possible to go for surgical eradication of disease.  The patient will still need adjunctive therapy (chemotherapy) to treat any microscopic cancer cells, but the prognosis is better than in cases where gross disease is left behind*.  During this surgery, after extended exploration – it looks like Dr. Ramos was able to get everything.

“It’s not pretty,” he admits, “but in these types of cases, aesthetics are the last priority,” [behind removing all the tumor].  Despite that – the aesthetics after this large surgery are not as worrisome as one might have imagined.

The patient will have a large abdominal scar – but nothing that differs from most surgical scars in the pre-laparoscopy era.  [I admit I may be jaded in this respect after seeing so many surgeries] – It is several inches long, but there are no obvious defects, the scar is straight and neatly aligned at the conclusion of the case – and the umbilicus “belly-button” was spared.

after the successful removal of a large tumor

As I walk out of the hospital into the 95 degree heat at 11 o’clock at night – I admit surprise and revise my opinion of Dr. Ramos – he is better than I expected, (he is more than just the kid next door), and he deserves credit for such.

*This may happen due to the location of metastatic lesions – not all lesions are surgically removable.  (Tumor tissue may attach to major blood vessels such as the abdominal aorta, or other tissue that cannot be removed without seriously compromising the patient.)  In those cases, surgeons try to remove as much disease as possible – called ‘de-bulking’ knowing that they will have to leave tumor behind.

Dr. Durazo, who is a fellow in the American College of Surgeons is a primarily Spanish-Speaking general surgeon specializing in gastroenterology (endoscopy, and capsule endoscopy) and general surgery procedures such as cholecystectomies, appendectomies, hemorrhoid surgery and Nissen fundaplication for GERD.  H also performs surgery for cancers of the GI tract.  He performs bariatric surgery but reports that this is only a small portion of his practice.

Dr. Durazo has been a surgeon for 22 years.  After attending UABC (Universidad Autonoma Baja California) here in Mexicali, he completed his general surgery residency in Hermosillo, Sonora.

He now serves as a professor of surgery for his alma mater, in addition to his private practice.  He primarily operates at Hispano – Americano, Hospital Almater, Hospital Quirugico de la Valle, and IMSS (government facility.)

Hopefully, I’ll be reporting back from the operating room one of these days.

I should be finishing my readings in preparation for clinic this afternoon, but after reading most of the day yesterday (it was an international holiday for people living outside the USA), I guess I am entitled to spend some time writing.

Besides, I spent an illuminating morning with Dr. Jose Mayagoitia Witron, MD, FACS over at Mexicali General Hospital.  While he was telling me what he doesn’t do: (no uniport laparoscopic surgery, and not a huge amount of bariatric surgery), what I observed told a very different story.

I didn’t follow Dr. Mayagoitia to the operating room.  Instead – I accompanied him to a teaching session with his medical students, who presented case studies – and I observed Dr. Mayagoitia instructing his students in the ‘Art of Medicine’.  This skill is fast becoming a lost one in today’s emphasis on the science of diagnostics, and laboratory testing.  But not here, not today – and not with Dr. Mayagoitia.

He believes strongly in the physical examination and all of the wealth of information that it provides.  He also believes it is an underutilized tool to connect doctors with their patients.  As he explains, too often doctors become too busy ordering tests – which separates the doctors from their patients – instead of listening to ‘the person in the bed’.  (My terminology not his).  So during his students case presentations – the emphasis is on the story (the clinical history), the patient’s life (background, social settings, diet, habits) and the clinical physical examination.  Students aren’t allowed to talk about, or ask questions about diagnostic results such as radiographs or serum analysis until the story and the physical findings have been throughly discussed and examined in detail.

Even then – he challenges them – to use more than their eyes – to engage their brains, and their other senses.. “What about the description of this surgical scar?  Does it seem a little large for an appendectomy?” he asks.. “What about it’s location?’ he challenges**..

“What about the differentials?  What other diagnoses should we consider? he asks.  “I know you think the diagnosis is obvious – but give me some alternatives,” he coaxes.  “What else could be going on?  Tell me why you don’t think that it’s X” he asks – making the students review and explore the other possible causes for this patient’s abdominal pain.  “Could it be Z?” he asks.. “Why not?  What else would we see?” he states in reply to a student’s mumbled answer..

Then, only then, do we review the labs, and the films – the more tangible aspects of the practice of medicine.  Those results that students can see easily, (maybe too easily) and tempt them into abandoning the ‘art’ of medicine and patient care.  But he doesn’t allow it – and quickly steers the conversation back to the displayed pathology to this pathophysiology and symptomatology of the patient in question.

As someone who still struggles with the physical skill of percussion – this entry into the art of medicine hits home.  It is an art, and a woefully underappreciated one.

** Please note – these quotes are my best approximation from my translations during the case presentation, and may miss nuances.

Dr. Mayagoitia is more than a clinical instructor – he is a respected professor of surgery at the Universidad Autonoma Baja California (UABC) and has been teaching medical students for over 20 years. He also teaches surgical residents and has been doing so for over fifteen years.  He gives lectures daily at the University, in addition to his busy schedule as the Supervising Surgeon for the Intensive Care Unit at Mexicali General, and private surgical practice (with evening clinic hours).

He speaks in clear, unaccented English (my southern accent is thicker than any accent he might possess) which may be as a result of his fellowship training in San Diego.   He completed his general surgery residency right here at Mexicali General after attending UABC).

He remains active in the research community as a supervisor for resident research projects including two ongoing projects worthy of note: a new study looking at the treatment of open abdomens, (from massive trauma, infection, etc.) and a study looking at the early initiation of enteral feedings versus delayed (72 hours or greater) in surgical intensive care patients.

He, along with his wife, Gisela Ponce y Ponce de León, MD, PhD (a family medicine physician and instructor at the UABC nursing school) recently presented a paper on obesity research in Barcelona, Spain.

He does all of this in addition to a steady diet of general surgery (cholecystectomies, appendectomies, bowel surgery (such as resections) and the occasional bariatric surgery.  As one of the lead surgeons at a major trauma hospital** – he also sees a considerable amount of emergency and trauma cases.

He reports that on the last – bariatric surgery, he has mixed feelings.  While it has become a popular staple for the treatment of obesity and obesity-related complications – he questions it’s role in a society that steadfastedly ignores the causes.  “I wonder if we will look back one day and realize that we [surgery] did a real disservice to our patients by doing so much of this.”  So, while he does perform some bariatric procedures, he is very selective in his patients.  “It’s not a quick -fix, and they are going to be dealing with this [changes from bariatric surgery] for the rest of their lives so they [patients] need to understand that it’s a lifelong endeavor.”  When he does perform bariatric procedures, he prefers the gastric sleeve, which he believes is more effective [than lap-band, and smaller procedures] but less devastating in terms of complications and dramatic life alterations.

General surgeon, Fellow in the American College of Surgeons

** He reports that Mexicali General, as a public facility, sees about 80% of all traumas in the area.

Actually, this title sounds way too dire for the pleasant and relaxed day I spent over at Hospital Santa Clara, interviewing Dr. Barrios, Thoracic Surgeon and two Thoracic residents, Dr. Juan Carlos Veron and Dr. Carlos Carvajal.. But it’s essentially true as I talked to the up and coming Dr. Barrios, and the future thoracic surgeons… Dr. Barrios is currently involved in some very interesting treatments for metastatic cancer. 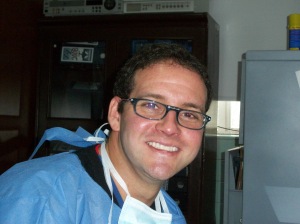 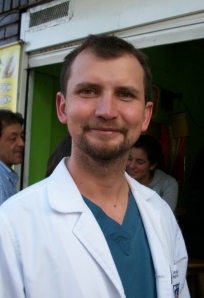 It’s been two months since my initial visits to see Dr. Fajardo, general surgeon and administrator at Santa Fe de Bogota, so I thought it was time to check back in (and check out the operating room). 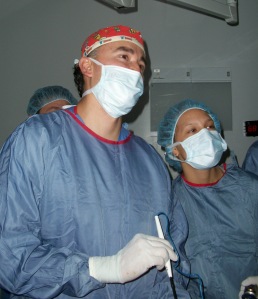 Dr. Fajardo was assisted during the case by Dr. Carlos Felipe Perdomo, general surgeon. In addition to operating, Dr. Fajardo is responsible for several new and innovative programs at Santa Fe de Bogota, including a 14 specialty telemedicine service which brings specialty consultations to patients in remote areas of Colombia.