Frankly, I wasn’t sure what to expect when I returned to see Dr. Victor Ramirez.  I had enjoyed talking to him during the first interview back in November of 2011, but as most people know – a lot had happened since then.  It took me a couple of weeks to re-connect with the now somewhat wary and (media-weary) surgeon, but when I did – he didn’t hesitate to invite me to the operating room.  And then – after the first case, he immediately invited me back**. 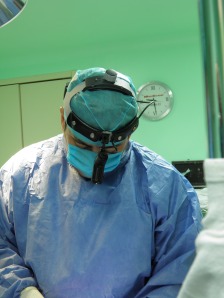 For readers unfamiliar with the concept of my work – let me tell you, this is usually an excellent prognostic indicator.  It’s certainly not fail-proof – but as a general rule; when a surgeon invites you to his operating room, he is generally confident because he is a good surgeon.

You’ll notice a couple of things about the statement above – when the surgeon invites me, is important.  Often when I have to ask – it’s because the surgeons are hesitant to let me watch.  Most (but not all of the time) – there is a good reason that a surgeon doesn’t want an observer in their operating room.  (And there are a multitude of reasons – not just a poorly skilled surgeon.)

But there are certainly no absolutes.  I have met fantastic surgeons who initially were not crazy about the idea (but quickly warmed up to it) and I have met less than skilled surgeons who happily encouraged me to visit – and everything in-between.. I’ve visited great surgeons who were hampered by poor facilities, unskilled staff, or limited resources.  That’s why the on-site, operating room visit is so important.  Anything less, is well – less than the full picture.

But back to Dr. Victor Ramirez – in the quirofano (operating room) performing surgery.

I observed Dr. Ramirez operating at two different facilities – Hospital Quirurgico del Valle, and the Bellus clinic.  Hospital Quirurogico is a private hospital – with excellent operating room facilities.  While there are only two operating rooms, both rooms are large, well-lit, new, and very well equipped.  There are three separate ‘big screen’ tv sized monitors for video-assisted procedures – so if you are looking for a facility for video-assisted procedures such as endoscopy, laparoscopy or thoracoscopy – this is the place.  All the equipment was modern, in new or ‘near-new’ condition.  As a facility specifically designed as a surgical hospital – with private rooms, patients are segregated from ‘medical patients’ with infectious conditions.  (The facility is not designed for pneumonia patients, and other medical type hospitalizations.)

Dr. Ramirez applied the sequential stockings himself (kendall pneumatic devices), and supervised all patient preparations.  Patients received a combination of conscious sedation, and epidural analgesia – so they were awake, but comfortable during the procedures.  (This eliminates many of the risks associated with general anesthesia – and reduces other risks.)  The anesthesiologist himself, Dr. Luis Perez Fernandez, MD was excellent – attentive and on top of the situation at all times.  There was no hypoxia or hemodynamic instability during either of the cases.  (I have been favorably impressed by several of the anesthesiologists here in Mexicali.)

As for the surgery itself – everything proceeded in textbook fashion – sterility was maintained, and Dr. Ramirez demonstrated excellent surgical techniques.

For example – One of the signs of ‘good’ liposuction (and good preparation) is the color of the fat removed.  Ideally, it should be golden or light pink in color.  Over-aggressive liposuction or poorly prepped liposuction results in more bleeding.  As I watched fat being removed – the fat remained golden-yellow in the suction tubing, and even at the conclusion of the procedure, the accumulated suction canister contents remained just slightly tinged pink.

Results were cosmetically pleasing in both cases with minimal trauma to the patients***- but there will be more details forthcoming in the free book (since the post is becoming pretty long, and may be more detail than casual readers would like.)  I’ll have more information about the doctors, including the anesthesiologists, the clinics and the procedures themselves..

I did want to post some specifics – especially in this case, as the patient told me that her/his parent is a retired physician and had concerns about surgical conditions.

Mom, Dad – you don’t have to worry – Dr. Ramirez runs an excellent OR. Even in the tiny Bellus clinic, there is a full crash cart, a defibrillator and an emergency intubation cart – just in case.

**Given what I know about Dr. Ramirez, I am pretty confident – that if I wanted – I’d be there right now, and every day for a month, or until I said, “stop”..  That’s the kind of person Dr. Ramirez is.

*** In some liposuction cases – the patients appear as if they have been beaten (extensive bruising) due to the amount of trauma and force used during the procedure.

7 thoughts on “In the operating room with Dr. Victor Ramirez, MD, plastic surgeon”