I wanted to post an update on a fantastic surgeon (who has since become a good friend).  In fact, Dr. Cristian Barbosa was one of the first surgeons I ever interviewed back in 2010 – and without his encouragement, the first book would have never gotten off the ground.  Maybe not the second book (Bogotá!) either – since once I said the magic words, “Oh – I interviewed Dr. Barbosa in Cartagena last year,” plenty of other surgeons who might not have talked to me – started to take me seriously. 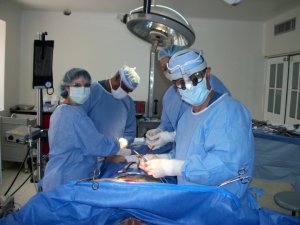 Ever since then – I try to keep in contact with Dr. Barbosa – he’s a great person and an absolutely phenomenal surgeon, so I email him every so often..

Since my last visit, back in August – Dr. Barbosa has left Hospital Neuvo Bocagrande – and is now operating in Clinica Santa Maria in Sincelejo, Colombia.

Sincelejo is the capital of the state of Sucre, which is part of the Caribbean region of Colombia.  Like most of this part of Colombia – it has a rich history, and was founded back in 1535 in the name of St. Francis de Assis, though it was long inhabited prior to that by native Colombian tribes such as the Zenu.  Unlike nearby Cartagena (125km north), Sincelejo is a more mountainous landscape, and is known for their agriculture, particularly cattle.  (wow – my stomach just rumbled  – must be missing those gourmet Corral burgers, which are my one Colombian indulgence.. Argentina has nothing on Colombian beef.)

Dr. Barbosa is still living in Cartagena and making a three-hour commute to perform life-saving surgery, while he works on creating a new cardiac surgery program back in our favorite seaside city.  (Hopefully, when he does – we’ll be invited back to take a look!)